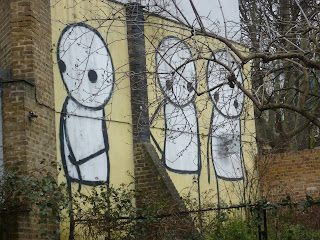 Some days the unexpected happens, which always delights me.  I had one of those days a little while ago.  A bus I was on stopped unexpectedly at the bottom of Tottenham Court Road, so I had to continue on foot, taking a small side passage leading to the back of Shaftesbury Avenue.  As I turned the corner behind St Giles Church I found myself walking along the pavement by the side of a small garden, closely surrounded on all sides by buildings.  I had been there before, and remembered being so happy to see a community garden tucked away here, obviously well-cared for by those who used it.  It's called the Phoenix Garden, an appropriate name, for it seems to be rising continuously from the ashes as a living symbol of nature striving to exist amongst all the new anonymous high-rise office blocks surrounding it.

I always feared for this garden, as it seemed just the sort of place in Central London which would entice developers.  But to my delight, not only is the garden still there, but it is being renovated at this moment.  Looking at its website when I got back home  (www.phoenixgarden.org.uk ) I was happy to see that the building work going on at the moment inside it (ominously I first thought) is only to build something to replace an old shed.

But apart from relief that the garden was still there, I suddenly saw something new, for on its side wall, the wall abutting the church, there had now appeared a large wall painting by a street artist I have great admiration for, who calls himself Stik. (Look him up on Wikipedia https://en.wikipedia.org/wiki/Stik.) The photo above shows this particular graffiti embraced by the branches of the trees in the garden.   Stik paints these beautiful stick-like figures (hence his pseudonym, presumably) on walls in places which are under threat from developers, not only in this country but around the world.  You can't really call them graffiti, because they are much larger and more expressive than that, but that is what they really are. A patient of mine told me he had seen one of his large paintings on a wall facing his hotel room in the States.  If you want to see more of his work, look at his website www.stik.org which shows some beautiful photos of his work from many countries.  And Penguins have published a lovely book, too, just called Stik.

Seeing these little people there on the wall cheered me up enormously on a day when I felt burdened by the dreadful news pouring in from around the world.  How good it is to know that there are people like Stik around who use their art to fight injustice.


Posted by Nora Franglen at 7:51 AM No comments:

Each of our lives should make a difference

I love coming across inspiring words.  The ones I have just read are from an interview with Bianca Jagger in today’s Guardian newspaper.  And if you want a good example of the Metal element, then you can also learn more about this element by looking at her photo (and presumably catch up with her on Youtube).

She has always been a great fighter against injustices wherever she finds them, a woman really to be admired.  The article finishes with these words from her:  “”Sometimes I say I work too much, I travel too much, I need a rest.  But I’m glad that I’m doing this.  I don’t think I would be happy to have a life of leisure.”

The interviewer then asks her what she hopes her legacy will be.  When she speaks, her eyes start to well up.  “I hope I was able to make a difference.  That’s all we can hope for.  That I can look back and say I tried.”

We should all emulate Bianca Jagger in ensuring that some aspect of our life “has made a difference”.  This does not mean it has to make a huge, or a public difference, as her life has done in many areas.  The importance is for each life to have had its own moments of significance, of having made some slight difference to the world, of having changed something, however small, for the better.  This is what I hope from my own life.

Posted by Nora Franglen at 9:46 AM No comments:

I have just spent a morning listening in admiration to Elisabeth Rochat de la Vallée talking about the points I love, the Windows of the Sky.  She said that these could also be called Windows of Heaven, since the character is really that of heaven, and this added another layer of meaning to the use of these points.   Her knowledge of Chinese and of the ancient texts, both medical and philosophical, is very profound, probably the most profound of anybody in the world at the moment.  At a theoretical, abstract level, what I learnt is fascinating, but, as always, I find that I have difficulty applying to my practice what I have been told about the symptomatic application of the various acupuncture points discussed.  So much of what I learned today therefore interested me from a theoretical rather than a practical point of view.

And this is how I have tended to view what I learn from those books which list points in terms of their symptomatic importance.  I always like to ask myself whether those whose texts we are referring to, both those coming from the far-distant past as well as those recently published, were or are experienced acupuncturists.  What has always been a sticking point for me is how far we are able to accept that what is told us can be shown to be soundly based on practice, rather than just being anecdotal.  Being the kind of person who needs to assess how far I trust the experience of those teaching me, and thus remaining sceptical until proven otherwise, I treat such recommendations with caution.  It is only once I feel that somebody is basing what they are saying upon deeply felt conviction and personal experience, and shows the kind of human empathy and kindness I expect of those helping their fellow human beings, that I can add what I am being told to my own practice.

Of course, this means that there are not many people who can convince me of the validity of their level of practical experience.  I have, though, been fortunate in having met some few people with deep enough experience and understanding to illuminate my path, foremost among them, of course, my teacher, JR Worsley.

In the field of acupuncture, one area which Elisabeth Rochat represents at the highest level is that which relates to pure scholarship – the ability to study an ancient language and reveal what it is telling us as accurately as possible.  Quite another area is that which deals with our practice – the ability to translate what has been learnt based upon having treated a sufficiently large number of patients to pass this learning on to other practitioners.  These two areas demand quite different skills, and must not be confused.  A scholar steeped in ancient Chinese cannot teach me what I feel confident enough to incorporate into my daily practice, but can deepen a different level of my understanding of what I do.  An experienced acupuncturist who I respect can teach me much that will help me in my daily practice.

Posted by Nora Franglen at 9:40 AM No comments: